The Precambrian: An Origin Story (Part I)

Scientists name what they know (and sometimes even what they don’t). So what do we make of the Precambrian? “Before Cambrian”? The term is doublespeak. It is slight-of-hand, a device to distract from the truth that much of the early Earth’s past is still a mystery. “Here be dragons.”

A Mystery Behind and Below

For a word that refers to nearly 90% of the vast stretch of our planet’s past, the word “Cambrian” has a very intimate meaning: “compatriots.” The word comes from the old Welsh name for people of their own tribe: Cymry (pronounced KIM-reh).

So, to these original inhabitants of the island we now call Britain,  the word basically meant “friend.”

The Romans entered England in the first few centuries A.D. and made “friend” foreign: they Latinized the Cymry into the more romantic “Cambrian.” The Anglo-Saxons who took their place completed the transformation of these “friends” into “foreigners,” naming them “Welsh.”

In that sense, Precambrian is an apt term: Foreign, yet familiar. Nearby, but distant. Alien, but wrapped up in our DNA.

So how did the latinized name for Wales come to refer to the oldest eonothem in geologic history? The short answer is an Englishman named Adam Sedgwick.

A Priest and Professor*

Adam Sedgwick was born in 1785 in Yorkshire, England. He was a son of the Anglican church and an Anglican vicar. Fifth “wrangler” at the University of Cambridge (Trinity College) in 1808, he became a fellow there shortly thereafter. In 1818 he became an Anglican priest, and the following year was appointed the Woodwardian Professor of Geology. Though his background in geology consisted of only one lecture course (geology was, after all, a relatively new discipline, catapulted forward by the geologic map of Britain produced by William Smith in 1815, an inset of which is the featured image of this post), Sedgwick took the position seriously and sought to learn geology in the field, traveling throughout Europe with top geologic minds to do so. Within a year, he “read” (a form of publishing) his first geologic paper. He began work with many of the top geologists in Britain to help develop a coherent timeline of some of the earliest stratigraphy known at the time.

In the early 1830s–by that time a recognized geologic expert and an effective teacher–he began work with leading geologic thinker Roderick Murchison. They coordinated field work in Wales, each working in separate areas as they sought to develop stratigraphic sequences there. In keeping with his focus on teaching, Sedgwick took a particularly bright young naturalist on one of his tours to Wales in 1831. The naturalist was preparing for a long period of field work, and was hoping to improve his skills in geology. Though only together for about a week, the effect of Sedgwick on this young scientist is memorialized in a letter dated several years later:

Tell Prof. Sedgwick he does not know how much I am indebted to him for the Welch expedition.— it has given me an interest in geology, which I would not give up for any consideration.

After returning from a lengthy scientific expedition on the HMS Beagle, the young scientist published several ground-breaking geological volumes. But the scientist would go on to publish one of the most important and contentious scientific works of the 19th century in another field, a work he would call On the Origin of Species by Means of Natural Selection.

In addition to his work with a young Charles Darwin, Sedgwick’s work with Murchison in Wales would also bear important fruit. This is in part due to the location: it is difficult to find a better place than southern part of the English Island to parse out stratigraphy. Left to right, the tale of Earth’s history is written in rock across the face of the island like a list: oldest first, youngest last.

In 1836 they published a joint paper, in which Murchison delineated the Silurian (named for an ancient Welsh tribe) and Sedgwick, the Cambrian. Over the next several years, new fossil evidence would reveal imperfections in the exact delineation between the two eras. This would result in a feud between Sedgwick and Murchison that would require an intervention of Ordovician scale.

Acknowledging the imperfections in their original delineation, Sedgwick proposed a new term for the pre-Silurian strata: “protozoic.” Murchison liked the name, but disagreed with Sedgwick’s use of it. In 1845, Murchison proposed the term “azoic,” which never caught on (azoic means “without life”: he thought his Silurian era should encapsulate all the strata with evidence of life. At that time, fossils had been found in all the Cambrian rocks in Wales except what would later be called the Lower Cambrian.)  In the next few decades, other terms would be proposed especially by geologists in North America, particularly in Canada where Precambrian outcrops are more plentiful. These terms were intended to fill out Sedgwick and Murchison’s original geological eons: James Dana called the Precambrian eon “Astral” (which also never stuck, poetic as it was), but also suggested “Archean” for the oldest era within the Precambrian in 1872; Samuel Emmons proposed the term “Proterozoic” in 1887 for the upper Precambrian rocks between the Archean and the Cambrian. With the addition of the Ordovician, the oldest stratigraphic names were beginning to be fleshed out.

Though the term “Cambrian” that Sedgwick applied to the foliated slate he investigated in Wales would metamorphose–like the rock itself had–over the next decades (see images below, from the British Geological Survey), the lasting impact of his scientific discipline, intuition, and drive would serve as a the foundation for geologists to build upon. Sedgwick’s story is large part the story of the provenance of the Precambrian, and his legacy would serve as the foundation–the basement–upon which other geologists would piece together their stratigraphy. 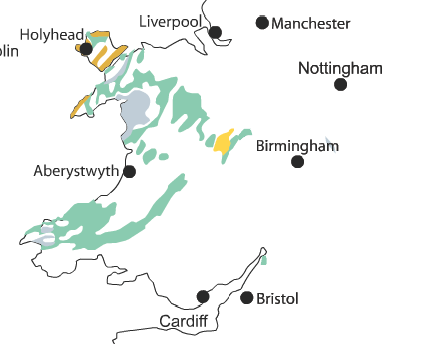 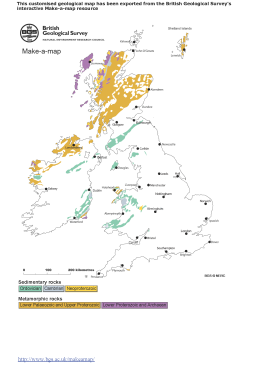 Rocks that Sedgwick would have considered “Cambrian” in Wales. The names for the eras that we use for these rocks differs now.

*Much of the section “A Priest and Professor” is taken (often word-for-word) from this article from the Yorkshire Philosophers’ Society Website. Many thanks to the authors for their in-depth history.

This blog is made up of dispatches from the heart of the North American Craton (Illinois), and brings to light some of the more fascinating histories that have been “written” into the earth from the perspective of geology, hydrogeology, and geophysics.

Unauthorized use and/or duplication of material in this blog without express and written permission from this site’s author is strictly prohibited. Excerpts and links may be used, provided that full and clear credit is given to Riley Balikian and Writing in Rock with appropriate and specific direction to the original content.